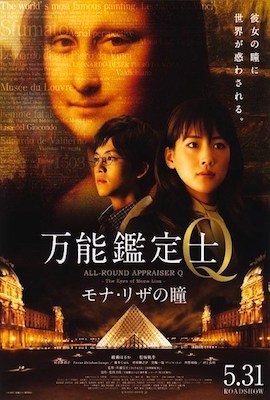 Ogasawara, a struggling reporter, stumbles upon Riko, a self-dubbed “all round appraiser,” who has a knack for identifying genuine and counterfeit articles of any kind and judging their price. Riko also catches the attention of the Tokyo Art Museum, which recommends her to the Louvre as an assistant curator for their upcoming Mona Lisa exhibit. Riko and Ogasawara travel to Paris for the preliminary testing, which she passes with flying colors. They return to Japan for a rigorous training course in identifying genuine works of art, led by Louvre representative Richard. Riko at first faces stiff competition from Misa, an art lecturer, but over time she warms to Riko and they begin training together. Towards the end of their training Riko begins to suffer physically and she struggles to appraise items in her daily work. She believes she may have encountered a rumored “curse” regarding the eyes of the Mona Lisa, and withdraws from the curator program.

Ogasawara mourns the loss of Riko’s talent, but when he studies his notes on the training he realizes that it was a setup. Richard, and his likely accomplice Misa, had purposely fooled with Riko’s abilities by having her repeatedly misidentify counterfeits as genuine. The “curse” was a red herring to keep Riko from discovering the truth. He shares his findings with Riko, and she realizes that something sinister is being planned. When the Mona Lisa arrives in Japan, Misa manages to steal it from its secure vault in the art museum and hand it off to Richard’s men. Riko confronts Misa. Misa reveals that over a hundred years ago, Vincenzo Peruggia was commissioned to steal the Mona Lisa by an art forger, so that forgeries could be sold as the original. Peruggia wanted badly to sell the painting himself, and when he tried to do so, he was caught. However, the painting that the Louvre claimed to have recovered was also a forgery; the original was kept by Peruggia’s family. Since the Louvre claimed it had the original, the Peruggias could no longer profit from the stolen painting. Richard is a descendent of Peruggia, so the painting came to his possession. Their plan is to steal the forgery and replace it with the original and expose the Louvre for fooling the world. Riko reveals that Misa has been tricked; the information Misa used to determine the authenticity of Richard’s Mona Lisa was incorrect and was purposely published by the Louvre so that they could easily identify the counterfeits. The police apprehend Misa and recruit Riko and Ogasawara to find Richard and save the original.

The police track down Richard’s last known location, but are too late to save the Mona Lisa from being burned. Misa realizes that the burnt Mona Lisa is also a fake, and that Richard betrayed her so that he could escape with the original. Richard had always planned on stealing the painting, and had fed the story of the fake Mona Lisa to Misa to get her cooperation. Riko and Ogasawara lead the police to Yokohama harbor, where Richard is attempting to flee with the painting hidden in a crate of posters for the Mona Lisa exhibit. Richard is arrested, and Riko and Misa work together to quickly identify the real Mona Lisa from among the posters. Afterwards, despite the museum’s insistence, Riko declines to resume the curator program, and enjoys visiting the Mona Lisa as a patron instead.