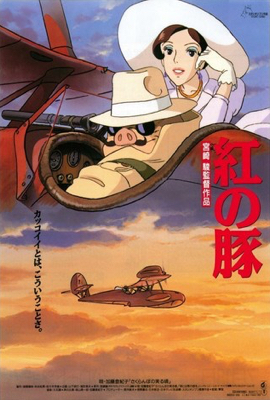 Marco, an ace pilot formerly of the Italian air force, now works as a bounty hunter thwarting pirates in the Adriatic Sea. He also, for some mysterious reason, has the face of a pig, and carries the nickname “Porco.” He frequents a bar run by Gina, an old friend of his who harbors romantic feelings for him, but does not seek any attachments after already losing several pilot husbands to the war. At Gina’s bar he meets Curtis, a cocky American pilot who has been hired by the pirates to take him out. When Porco makes a trip to Milan to have his plane’s engine repaired, he is set upon by Curtis, who ruins Porco’s plane and claims victory. Porco manages to salvage the fuselage and take it to Milan.

Porco meets up with his friend Piccolo, who runs a mechanic shop. Porco is surprised to meet Piccolo’s spunky granddaughter, Fio, who is also his chief designer. Porco reluctantly allows Fio to redesign his plane to be faster and gain an edge over Curtis. Fio also decides to accompany Porco to the Adriatic, against Porco’s wishes. Back at Porco’s island hideout, they are accosted by the pirates. Fio speaks up for Porco and insists that the pirates conduct their affairs with honor. The pirates agree and settle to have Porco duel with Curtis a second time. If Porco wins, Curtis has to pay off the debt he incurred to repair the plane. If Curtis wins, he will take Fio, with whom he was instantly smitten, to be his bride.

The duel draws a huge crowd of pirates and spectators alike. The duel continues until both planes’ guns jam, and Porco and Curtis land to box each other on the beach. They wear each other out, and Curtis taunts Porco for not having the courage to return Gina’s affections. Gina herself arrives at the island, and her appearance spurs Porco to win the duel. Gina warns everyone to clear out, as the Italian air force is on its way to apprehend the pirates. Porco shoves Fio onto Gina’s plane to be sent back to Milan, and then he and Curtis take off to draw away the air force so everyone can escape. 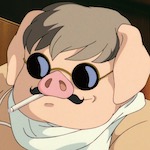 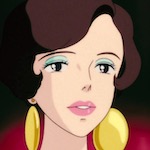 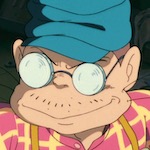 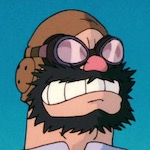 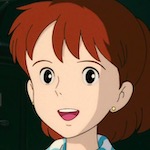 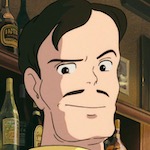