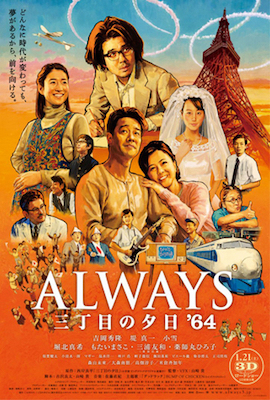 Amid all the excitement of the Olympics coming to Tokyo, life goes on as usual in Third Street. Mutsuko, the Suzuki’s live-in worker, heads out early in the mornings so that she can run into the handsome Dr. Kikuchi on his way to work. Kikuchi also takes an interest in her and stages a breakdown of his car so he can visit her at her garage. Meanwhile, Chagawa struggles to make ends meet to pay for his adopted son Junnosuke’s education and care for his pregnant wife Hiromi. Chagawa has sternly warned Junnosuke not to pursue a writing career in order to spare him the same hardship he has endured. However, a new mystery author has been submitting articles to Chagawa’s boys’ magazine, and has surpassed Chagawa’s works in popularity. The publication is considering dropping Chagawa’s series entirely.

Junnosuke confesses to Chagawa that he is the mystery author, and that he’s been writing and submitting articles in his spare time; he only meant to test his abilities, and never thought he’d become Chagawa’s rival. Chagawa orders Junnosuke to destroy his writing notebooks so he can focus on his schooling. Mutsuko and Kikuchi go on an overnight vacation to Chiba, which irks the Suzuki’s who have heard troubling reports of Kikuchi’s character. All is made clear, however, when the vacation is revealed to have been to Kikuchi’s parents, so Kikuchi can propose to Mutsuko. Kikuchi’s has a poor reputation with his hospital because he has been offering free treatment to the destitute. Mutsuko is at first reluctant to depart from the Suzuki’s, but they release her from employment with their blessing. Mutsuko and Kikuchi are married.

Hiromi gives birth to a healthy baby girl. Chagawa receives word that his estranged father has passed away. Chagawa discovers that although his father was very vocal in his disapproval of Chagawa’s writing career, he was secretly an avid collector of his works. He was stern with Chagawa so that Chagawa would be motivated to work hard at his writing. Chagawa realizes he has been unfair to Junnosuke, and makes arrangements with his publisher to take Junnosuke under his wing and tutor him. He stages a confrontation with Junnosuke, like his father did with him, to instill in Junnosuke the same drive to succeed as a novelist. Junnosuke departs, understanding Chagawa’s intentions and anticipating their future rivalry.