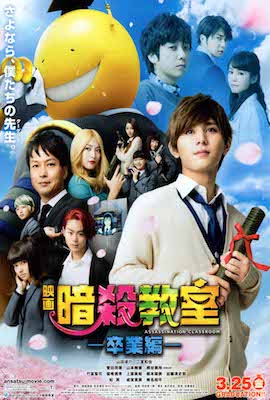 Class 3-E is nearing graduation and is no nearer to fulfilling their mission of assassinating their teacher: a towering, tentacled creature of near limitless power dubbed “Korosensei.” Korosensei had declared previously that he would destroy the Earth within the next year, and the military is seemingly powerless to stop him. Nevertheless, the students of 3-E study their teacher and try to find a weakness. One of the students, Kayano, grows her own set of tentacles and attacks Korosensei, blaming him for the death of her sister, former teacher Aguri. Nagisa, another student, manages to subdue Kayano long enough for Korosensei to remove her tentacles. The incident prompts Korosensei to reveal his past to the class.

Korosensei used to have a human form, and had gained infamy for being a skilled assassin. He was captured, but instead of standing trial for his crimes, he was volunteered for experimental energy research that involved exposing his body to antimatter. The energy and rapid cell growth allowed him to grow his first tentacles. He befriended Aguri, one of the research assistants, and learned that she also worked part-time as a teacher for Class 3-E. Yangisawa, Aguri’s fiancee, behaved very cruelly to her, and the assassin came to resent him. Lab mice exposed to the antimatter experiment were sent to the moon, where their cell division reached a critical stage that destroyed most of the moon. Yanigasawa feared that the same thing would happen to Earth on a much larger scale if the assassin’s experiment was allowed to continue, and ordered him to be destroyed. The assassin took advantage of his new powers to escape from the lab, but the defense systems deployed to stop him accidentally killed Aguri. Aguri’s last request was for him to use his remaining time helping the students in her class succeed. The students realize that Korosensei will end up destroying the Earth whether he wants to or not unless one of them is able to assassinate him.

The military finishes developing a space-based laser weapon designed to eliminate Korosensei. The students are rounded up to keep them out of the danger zone. The students learn that the military was treating them as bait, and only allowed them to be taught by Korosensei to keep him occupied while they completed the laser weapon. The students resolve to take care of Korosensei themselves, and break out of confinement. They reunite with Korosensei at the classroom in the danger zone. Yanagisawa reappears, having grown enough of his own tentacles to rival Korosensei, and attacks. Korosensei tries his best to protect the students from Yanagisawa’s onslaught, but when Kayano is injured, Korosensei changes into his fearsome rage form. Korosensei unleashes an energy attack that obliterates Yanagisawa. Afterwards, Korosensei bids farewell and allows himself to be held down by the students while Nagisa delivers the fatal blow to kill Korosensei and save the Earth from destruction.