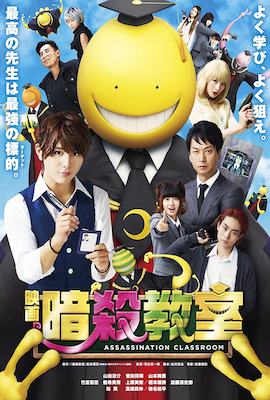 A mysterious event causes a large portion of the moon to disintegrate. A tall, yellow, tentacled creature appears and claims responsibility. He also claims that he will destroy the Earth itself within a year. Before then, he makes a strange arrangement with the Japanese government; he is allowed to teach Class 3-E at Kunigigaoka High School, a class full of delinquents and poor performers, giving each of them the opportunity to assassinate him before graduation. The reward offered for the assassination is ten billion yen. The military designs weaponry that is lethal to the creature but harmless to humans for use in the classroom. The students dub the creature “Korosensei.”

Despite their stated mission, the students begin to bond with Korosensei as he teaches them a number of life lessons tailored to their individual situations. The Japanese government grows anxious and sends in professional assassins to try and expedite Korosensei’s death, including Itona, another tentacled boy, and Takaoka, an overbearing and violent gym instructor. Finally Korosensei makes a deal with the students: whoever gets a top score in a given subject on the next exams will earn the right to remove one of his tentacles. Six students manage to do so, and so the class sets up an elaborate stage designed to deprive Korosensei of his abilities as soon as the tentacles are removed. Korosensei panics and encases himself in an indestructible crystal membrane. While in this form, Korosensei cannot be killed, but he is also immobile.

Takaoka and Itona both return to Class 3-E and attempt to kidnap Korosensei. Nagisa and Karma, two of Korosensei’s students, lead Itona on a chase, luring him into a trap that neutralizes his tentacles. Nagisa uses an anti-Korosensei knife to sever Itona’s tentacles and return him to normal. Nagisa also stalls with Takaoka until the rest of the class can corner and subdue him. The military decides to take Korosensei in his current form and bury him in anti-Korosensei explosives, so that when the shield drops he will be instantly killed. Korosensei miraculously escapes the execution attempt and returns to teaching.