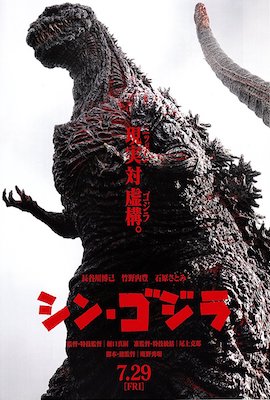 A steam explosion in Tokyo Bay kicks the Japanese government into emergency response mode. However, the more they analyze the situation, the more serious the situation becomes. A creature emerges from the steam and makes landfall, causing massive devastation and loss of life before returning to the ocean. Yaguchi, a cabinet aide, is frustrated with the red tape and bureaucracy that kept the government from responding sooner and preventing the destruction. Yaguchi gathers a group of like-minded underlings from across different departments and begins studying the creature. They discover to their consternation that the creature left a trail of radioactive residue in the city; somehow the creature’s metabolism produces radioactive isotopes. Kayoko, a liaison with the US, meets with Yaguchi and reveals that a disaffected Japanese scientist, Goro Maki, predicted the appearance of this creature years ago, and named it “Godzilla.” Maki himself has disappeared; he apparently committed suicide by jumping from his yacht in Tokyo Bay shortly before the creature appeared, leaving behind a cryptic schematic of Godzilla’s cellular structure.

Godzilla reappears, having doubled in size and walks upright towards Tokyo again. The self defense force’s attempts to stop Godzilla fail, and the US initiates a bombing strike on Godzilla in downtown Tokyo. Godzilla retaliates with a massive release of radioactive energy, destroying the bombers and incinerating several wards of Tokyo. The prime minister and several of his top advisors and ministers are killed in the incident, forcing Yaguchi and his team to take more responsibility in the interim government. Yaguchi’s team discovers that Godzilla’s DNA is many times more complex than man’s, and is capable of virtually limitless adaptation, meaning even a small piece of Godzilla tissue can reconstitute itself as a living organism. Godzilla as an organism threatens to spread across the globe and destroy civilization. The US pressures Japan and the UN to allow a thermonuclear strike on Godzilla where he’s resting in the heart of Tokyo. Yaguchi rushes to prepare his own plan to defeat Godzilla and avert the nuclear strike.

Since Godzilla’s internal energy source is essentially a nuclear reactor, it requires cooling to prevent overload. Yaguchi’s team plans to “freeze” Godzilla by injecting him with blood coagulant, forcing Godzilla to “scramble” his reactor in order to stay alive. Kayoko uses her influences at the UN to postpone the nuclear strike long enough for Yaguchi to produce enough coagulant to use on Godzilla. The operation begins by goading Godzilla into using up his energy reserves on a fleet of armed drones, and then demolishing nearby skyscrapers to pin him to the ground. A truck fleet injects the coagulant, and Godzilla freezes, his internal temperature plummeting to near absolute zero. The nuclear strike is called off, but is left on the table as an option should Godzilla resume activity.